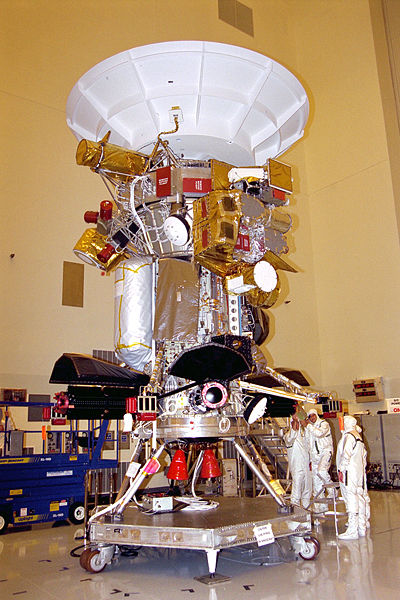 Josh Colwell is a professor who works at UCF in the physics department in the planetary science group. His research is in the area of solar system dynamics. Some of the particular problems that hes working with are the origins and evolution of Saturn’s rings, the dynamics of interplanetary dust and it behavior of dust near objects such as the moon, and asteroids, and the origins of the planets.

In the area of research of the origins and evolution of Saturn rings, Dr, Josh Colwell is one of the co-investigators on one of the instruments onboard the Cassini spacecraft. Cassini is an international mission in which NASA and the ESA (European Space Association) sent a spacecraft that’s has orbiting around Saturn for almost five years after its launch in 1997, and in fact is the largest most ambitious interplanetary spacecraft, containing 12 instruments on board. One of these instruments on board is an ultraviolet camera called the ultraviolet Imaging Spectrograph or UVIS. Dr. Colwell belongs to a team who works directly with this instrument, which has the responsibility of ring observations, and the study of the structure and composition of Saturn’s rings. He analyzes data obtained from the spacecraft in order to learn about the behavior of dust particles in the rings of Saturn, and what can he learn about that from how these rings are formed and how old they are. 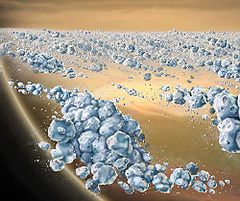 A traditional view of the formation of Saturn’s rings before scientists has spacecraft observation was that these rings were pretty much left over from the formation of the planet. But not until the late 70s and early 80s a lot of measurements and analysis were made that showed that the rings weren’t as old as the planet, this conclusion was drawn after observations of the rings were maid. One of the most compelling observations is that since most of these rings are made up of mostly ice it allow us to study non icy materials that are mixed in with the ice. Since the Saturn’s rings surface is larger than the surface of Saturn itself, means that these rings remain under constant bombardment planetary dust particles which are not water ice, should have darken the rings over time By looking at this darkening Dr. Colwell and his colleagues can estimate that in order for Saturn’s have to be about 2% and 5% at most of the age of the solar system. Besides this, there are other suggestions of why it is believed that these rings are younger that it was previously believed. 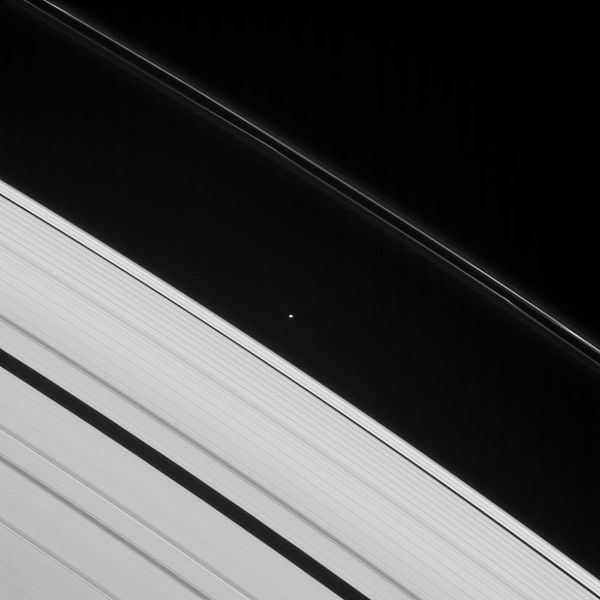 The Roche Division (passing through image center) between the A Ring and the narrow F Ring. Atlas can be seen within it. The Enke and Keeler gaps are also visible

This again brings up the question of how the rings were formed. The general idea of the formation of the rings is either by breaking a part of a moon, after the moon moved in too close enough so that the planets tidal forces fro the planet in order to prevent it form re-creating. Another possible scenario that could explain the formation of these rings is, Saturn’s gravity is able to capture an object like a gigantic comet, which ends up breaking apart due to strong gravitational forces and finally entering into an orbit around the planet.

The reason for the constant study of the Saturn’s rings is to understand the history of our solar system, how the solar system has evolved, and its origin. In many cases Astronomers look at these rings to answer to several questions due to the fact that these rings are one of the most obvious features of the solar system. Also, some of the physics that goes on in Saturn’s is very similar to the physics that goes on the spiral galaxies, which give them this particular shape. And another scenario where these physics similar to the ones that goes on in the rings is in the early days of the solar systems which consisted in a disk of dust before the planets were formed. So I other words by studying the rings we are able to work have a laboratory in our own “backyard” that we can often look at for answers that can show us how general planets systems form and evolve.

F ring dynamism probably due to perturbing effects of small moonlets orbiting close to or through the ring’s core.