(Brace yourselves, quantum computers are coming)

Eduardo Mucciolo’s group at UCF is studying fundamental issues related to the electronic devices based on molecules, carbon nanotubes, and graphene (which is a material
made out of a single sheet of carbon atoms). 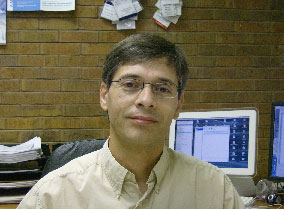 1. What is quantum mechanics? What are quantum computers?

Quantum Mechanics is the theory that describes molecules, atoms, nuclei,and elementary particles. These microscopic bodies do not follow the same laws of mechanics that we see to work so well in the macroscopic world.

Quantum computers are machines that take advantage of some exoticproperties of these microscopic (actually, sometimes not so microscopic)
objects. One of them is that systems can at the same time be in a state
which is a combination of two, sometimes contrary, configurations (the
famous Schroedinger cat paradox). Second, they use another property of
quantum mechanics – entanglement – to do a super-efficient parallel
processing. Exploring these two properties allowed researchers to come
up with algorithms (codes) which would solve certain problems in a
quantum computer much faster than what we can currently do in a normal
(“classical”) computer.

2. What issues are you and your team currently working on that is
related to electronic devices that are based on molecules to perform
their tasks?

We are trying to understand what happens when you put, for instance,
a magnetic molecule between to metallic contacts and run current
through it (by applying a voltage difference to the contacts).
We believe that the magnetization of the molecule will perform a
very exotic dance that we can control with a magnetic field.
Controlling this dance acts back on the current, so we can modulate
how much current runs through the molecule by playing with this
dance. The basis of this control is a quantum mechanical effect
called topological interference.

3. What is your current involvement with graphene? Why and how do you
and your group study it?

I’m trying to simulate in my computers how a graphene-based transistor
would behave. We are particularly interested in understanding how much
disorder in those materials and the surroundings affects their electric
properties. We do that by building mathematical models and solving them
on a computer (unfortunately we have to do that in our classical ones,
as quantum computers are not available yet…)

4. What are large quantum computers, and how are they different to
regular computers?

Large computers would have, say, 10,000 qbits (quantum bits). That’s
when the quantum algorithms start to beat the classical ones we
currently use by a big margin of efficiency. These large quantum
computers would be completely different from anything we have now.
Small or big (in physical size), they will extremely difficult to
operate and very delicate. They will likely require technology that
we still don’t know. So, perhaps only a few laboratories in the
world we have them, and most likely military ones, at least in the
beginning. But whoever has such a machine will be able to break
into any network, figure out most passwords, and essentially
control all encrypted communications that use the best standards
we know nowadays. If the quantum computer is attached to a
quantum network (which is actually much easier to develop), then
it will be able to communicate information in a completely
secure way. 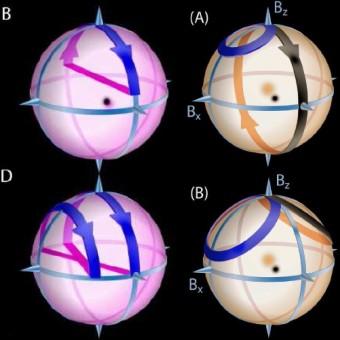 5. What are qubits? What are their functions? Why are they so important for quantum computers?

Qubits are the units of quantum information, much in the same way thatbits are in regular computer. The difference is that they don’t just
take the states 0 and 1, but any superposition of these two. They areused to store and manipulate information in a quantum computer. Now,there are several ideas on how to create qubits in practice and peopleare currently exploring them. Some are based on the magnetization ofan atomic nucleus, others in the magnetization of a single electron.There are also some based on the different states an atom can have or the two different directions an electric current can take in a
tiny loop made of a superconductor material. They all have advantages
and disadvantages and there is nobody ones which one will be the
ultimate choice.