The Intel International Science and Engineering Fair was Fantastic! Our group took a plane flight from Orlando all the way to Reno, Nevada. Once we got there we went straight to the hotel, which was as glamorous as something you would find in Los Angeles! (Thanks to Dr. Nelson Ying, and the State Science Fair for sponsoring this.) There were pools, hot tubs, slot machines (that I “wasn’t allowed to use”), and best of all, tons of people from around the world staying in the same hotel! 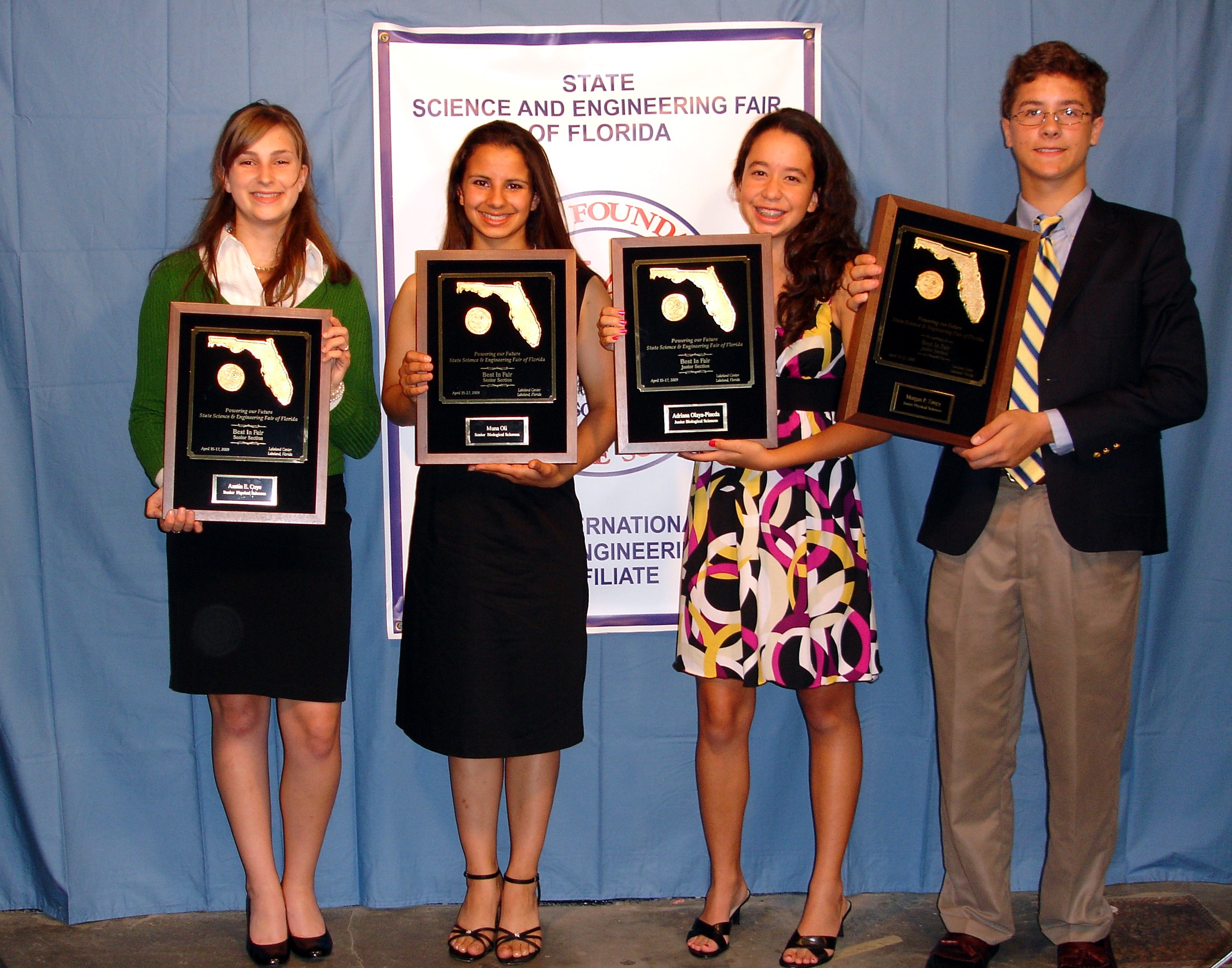 ISEF Winners Austin Coye first on the left side.

Throughout the week, I hooked up with some people that I had already known from Florida who I had seen at previous Science Fairs and met loads of people from across the United States and around the world. I met many of these people during an ISEF tradition called the pin exchange. Every city/state/region/ province has a bunch of pins that they exchange for pins from other places. I think the best one I got was from Russia.

After everyone had set up his or her project and got safety approved (not the most fun, I’ve ever had…), we left to go back to the hotel. We changed into out suits and headed out to the pool to some tanning and just to meet some more people (preferably some hot guys). This came to be our tradition every night as we meet more people and found more things to do around the Casino that was our hotel.

On our day off, there were Nobel Prize winners giving lectures about projects that they had completed and even things that they were working on. They gave us tips for future projects and were all-around inspiring. We also had time that day to explore a little of Nevada. Our group took a bus over into the mountains and we went Kayaking in Lake Tahoe. It was a little cold, but still beautiful.

Judging was insane! I was so nervous (along with my roommates) that we were shaking on the bus and as we got into the Convention Center where our projects were set up, it got even worse! These judges were people that knew their field the best in the world, especially the physics judges. One judge I had asked me about physics concepts that I didn’t even know had to do with my project. (I am still not completely sure that it does.) There were also special judges that I got to have a little fun with. I had to somehow convince then somehow that my project was the answer to whatever their issue was. For example, for the military judges, I explained how the new technology could have potential battle application. I didn’t really get the hang of it until the end though so next year, I’m going to work on that.

ISEF also had a student mixer where everyone came together and had a little dinner and party after judging. It was hilarious because no one knew how to dance except a few people so everyone was just kind of doing their own thing and loving it. It was a great opportunity for everyone to show that they were more than just their Science projects and simply have a great time.

The ceremonies were really exciting. They had three jumbo-trons (really big television screens), upbeat music, and famous announcers including the replacement for J. Lenno, Conon Obrien! (He was even interviewing people next to their projects.) They had acrobats and magicians as well. They also had a whole gift shop with T-shirts and buttons that said “Kiss me, I’m a genius” and other things like that.

The award ceremonies were really intense, but I was so tired that I was not at all affected by the excitement. When they called people’s names from my group however, I felt a whole burst of life jump into me as I realized their achievement.

Overall, this was a huge deal put on my Intel that brought together high-school scientists from around the world to come together, compete, and just get to know each other.